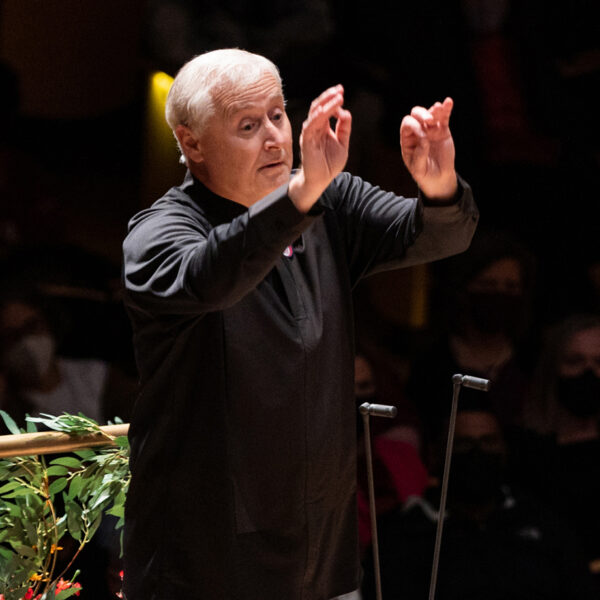 Stars from the worlds of Broadway and dance

(NORTH BETHESDA, MD) — National Philharmonic announced today its 2022-2023 season, which includes eight classical programs conducted by Music Director Piotr Gajewski and two by Chorale Artistic Director Stan Engebretson; two pops shows led by Principal Pops Conductor Luke Frazier; and a piano recital. All season concerts will be held at The Music Center at Strathmore in Maryland, the Orchestra’s longstanding home, and a selected number of concerts will also be presented at Capital One Hall in Northern Virginia.

“NatPhil’s 2022-2023 season includes many great orchestral classics with symphonies from Beethoven to Rachmaninoff, choral classics—such as Berlioz’s Requiem and Orff’s Carmina Burana—as well as works by numerous underrepresented composers and completely new compositions by Henry Dehlinger and Adolphus Hailstork; the latter features a collaboration with NASA. Pops offerings include tributes to Broadway and to Nat King Cole. There’s literally something for everyone to discover and enjoy!,” said Gajewski.

Notable repertoire and guest artists in the newly announced season include:

In addition to these classical and pops programs, National Philharmonic will also offer family shows and a chamber music series (curated by Concertmaster Laura Colgate) throughout the season. Concerts as part of those series will be announced at a later date.

NatPhil’s 2022-2023 season gets off to a spectacular start with some of the best symphonic music by diverse and celebrated French composers. Experience Joseph Bologne, Chevalier de Saint- Georges’ Symphony No. 1 in G Major, a piece that many say rivals the best of Mozart’s work, and Symphony No. 3, a neglected masterpiece by musical genius Louise Farrenc. Violinist Gil Shaham joins NatPhil for Camille Saint-Saëns’ Violin Concerto No. 3, bringing its melodic invention and impressionistic subtlety to life. Together, these three compositions make for a joyful and magical aural experience. Venez voir la magie!

After months of dimmed marquees and ghost-lit theaters, Broadway’s Brightest Lights puts the spotlight on some of the best and brightest talents working today, under the direction of NatPhil Principal Pops Conductor Luke Frazier. Tony-Award nominee Broadway diva Megan Hilty (Wicked, 9 to 5: The Musical, Noises Off) is joined by Michael Maliakel (Disney’s Aladdin, The Phantom of the Opera, Monsoon Wedding) and Luke Hawkins (Annie Live, Xanadu, Singin’ in the Rain) to perform some of the greatest hits straight from Broadway. From Gershwin to Lerner and Loewe, Kander and Ebb to Sondheim, this program has something for every Broadway baby to love and will have you dancing in your seat and singing all the way home.

Stan Engebretson, artistic director of the National Philharmonic Chorale, celebrates his storied tenure with the ensemble with Berlioz’s visionary and masterfully orchestrated Requiem. Engebretson brings Berlioz’s bombastic Opus No. 5, also known as The Grand Messe des Morts, to life with the power of the NatPhil Chorale and soloist Norman Shankle, a tenor who has risen to worldwide prominence through acclaimed performances with The Metropolitan and San Francisco Operas; at the Kennedy Center in Washington, D.C.; and the Dresden Semperoper in Germany.

Come see why Berlioz said, “If I were threatened with the destruction of the whole of my works save one, I should crave mercy for the Messe des Morts.”

From ballet to Broadway, Shakespeare’s most romantic and tragic love story has been interpreted by some of the greatest composers in history. Experience the exquisite Fantasy Overture from Romeo and Juliet by Pyotr Ilyich Tchaikovsky, a passion piece for National Philharmonic Music Director and Conductor Piotr Gajewski, followed by Leonard Bernstein’s West Side Story Suite, arranged by David Newman. Violinist Sarah Chang, a favorite of NatPhil audiences, lends her captivating tone and energizing spirit as the featured soloist for the Bernstein classic. Finally, Gajewski will conduct a performance from Sergei Prokofiev’s Romeo and Juliet ballet. Bring your loved one and make of your hands one hand while you listen to three distinct yet equally emotional musical interpretations of the bard’s most beloved tragedy.

Hallelujah! It’s time for to mark the most wonderful time of the year with Handel’s Messiah. Messiah is a time-honored tradition that offers the occasion for community to come together and embrace the comfort and joy this holiday classic unfailingly brings every year. We hope your family will join our National Philharmonic family in celebration. Tis the season!

Join NatPhil and guest artist soprano Danielle Talamantes for an evening of unique compositions from Argentinian composer Alberto Ginastera, considered one of the most important 20th century

composers of the Americas, and the iconic Gustav Mahler. Talamantes brings a fiery and impassioned interpretation that perfectly complements the intensity of Ginastera’s masterwork, Milena, a dramatic cantata for soprano and orchestra based on the letters of Franz Kafka. The powerful musical arc of Mahler’s Symphony No. 4 unfolds like a grand folk tale. A singular musical experience, Mahler has described it as reminding him of his mother’s smile and sounding like “adewdrop on a flower that suddenly, illuminated by the sun, bursts into a thousand lights and colors,” and later that it “explodes into a wall of sound representing the gates of heaven.”

Sergei Rachmaninoff deserves to be celebrated every day, but 2023 marks 150 years since his birth on April 1st, 1873. Considered one of the most influential and well-known Romantic composers, Sergei Rachmaninoff said, “Music is enough for a lifetime, but a lifetime is not enough for music.” In celebration of his 150th birthday, NatPhil presents two of his most quintessential works, beginning with the familiar and beloved Rhapsody on a Theme of Paganini, featuring piano virtuoso Claire Huangci. Following the crowd-pleasing Rhapsody is Symphony No. 2 in E Minor, an intense piece from Rachmaninoff’s early career. Known for its memorable emotionally driven melodies, Symphony No. 2 is the perfect conclusion to a program celebrating a composer that, after a century and half, still remains inspiring to classical fans the world over.

An Evening of Chopin with Pianist Brian Ganz
Brian Ganz, piano
Saturday, February 25, 2023 at 8:00 p.m. at The Music Center at Strathmore

The metropolitan Washington area’s favorite pianist, scholar, world-renowned instrumentalist and passionate devotee of Frederic Chopin Brian Ganz continues his quest to play every note ever written by Frederic Chopin live in concert with his 12th appearance in recital on the National Philharmonic stage. Ganz’s phenomenal interpretation of pieces from Chopin’s catalog continues to memorably knock more and more works by the Polish Romantic composer from his to-do list in the project he calls “Extreme Chopin.” Come hear the passion and precision of a master and witness a man on a mission at work.

Bach at His Best: Mass in B Minor
Piotr Gajewski, conductor
with National Philharmonic Chorale
Saturday, March 18, 2023 at 8:00 p.m. at The Music Center at Strathmore

Sublime and awe-inspiring, the Mass in B Minor is seen as one of the supreme achievements of classical music, and the most beautiful of Johann Sebastian Bach’s choral works. Maestro Piotr Gajewski and the National Philharmonic Chorale enliven a masterwork that is at times transcendent, and at others an intimate meditation. Bach’s Mass in B Minor is most inspiring when

experienced in person and can spark an appreciation of classical in the most hesitant of music lovers.

Past and present collide in this performance of contemporary works and classical masterpieces. Valerie Coleman’s Umoja, Anthem for Unity for Orchestra under the direction of Maestro Piotr Gajewski brings the lushness of a full ensemble to Coleman’s original work composed for chamber ensemble. Violinist Melissa White, a NatPhil favorite, returns to perform Florence Price’s sweeping, melodic Violin Concerto No. 2.

The second half of the program unites Carlos Simon’s Fate Now Conquers with its inspiration. “Using the beautifully fluid harmonic structure of the second movement of Beethoven’s 7th Symphony,” Simon explained, “I have composed musical gestures that are representative of the unpredictable ways of fate. Jolting stabs, coupled with an agitated groove with every persona. Frenzied arpeggios in the strings that morph into an ambiguous cloud of free-flowing running passages depicts the uncertainty of life that hoovers over us.”

To contextualize Simon’s piece is Beethoven’s ebullient, optimistic Symphony No. 7, showing not only his, but the works of Coleman and Price, sit comfortably at home alongside one of the most famous and popular symphonies in the history of classical music.

One of the greatest singers in pop and jazz history, Nat King Cole had a velvety voice that soothed and stirred the heart in equal measure, leaving an indelible mark on the American Songbook with iconic interpretations of countless hit songs. The smoothest of crooners, he made it look easy singing unforgettable songs that still feel as nostalgic as a drive down Route 66. Embrace the retro vibe and join NatPhil Principal Pops Conductor Luke Frazier as we welcome Tony Nominee, Grammy- and Emmy Award-winner Christopher Jackson (In the Heights, Hamilton), Aisha Jackson (Frozen, Paradise Square), and duo piano team Steven Mann and Ray Wong, award-winning pianists and veteran performers based in Manhattan. Nat King Cole broke color barriers in music, but his smooth persona belied the challenges he faced. His long and storied career is a testament to his patience, grace and talent, and his songs are still mainstays on jazz radio. The program includes Cole’s greatest hits, like “L-O-V-E,” “The Very Thought of You,” “Stardust,” “Mona Lisa,” “For

Sentimental Reason,” “Sweet Lorraine,” and many other timeless tunes to make you long for a dry martini and the perfect dance partner.

The 2022-2023 season concludes as National Philharmonic presents the world premiere of Symphony No. 5 by Adolphus Hailstork, performed in its entirety for the first time. Hailstork, known for creating compositions influenced by musical ideas from both the African American and European traditions, returns to NatPhil after the success of the world premiere of A Knee on The Neck in 2022.

Subscriptions and packages to National Philharmonic’s 2022-2023 season will be on sale soon at nationalphilharmonic.org. Single tickets will go on sale later this summer.

All guests at any indoor National Philharmonic events at any location will need to be fully vaccinated with the Pfizer, Moderna, or Johnson & Johnson vaccine, and must show proof of vaccination with their ticket upon entry to the theater. These policies will be evaluated regularly based on updated community health data, public safety best practices, and government guidance.

In addition to vaccine protocols, patrons will be required to wear masks in the venue and through the duration of National Philharmonic performances.

About the National Philharmonic

National Philharmonic is an accessible, enriching component in the Greater Washington D.C. Metropolitan Area, believing that music has the power to spark imagination and shape the world around us. As the only organization with a united orchestra and chorus in the region, over the years National Philharmonic has expanded its footprint beyond its home at Strathmore, with year-round masterclasses along with Summer String and Summer Chorale Institutes for youth, armed services programs, and partnerships with community organizations. In addition to these programs, National Philharmonic fosters a love of music in young people across the region by offering free admission to all children between the ages 7 to 17 years old.